Click on the link of the research you want to read more about to get there instantly. Otherwise, keep scrolling down for all of the information.

Proton-coupled electron transfer from tryptophan with water as primary acceptor can be tuned to occur via either a step-wise electron transfer-proton transfer (ETPT) or a concerted reaction (CEP), in contrast to established predictions. 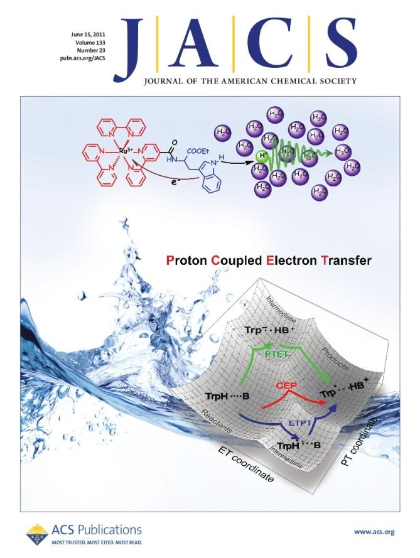 We demonstrated the strong distance dependence of PCET in a series of related compounds, with a “beta-value” of ca. 27 Å-1. This has strong implications for the design of PCET reactions e.g. for solar fuels catalysis. 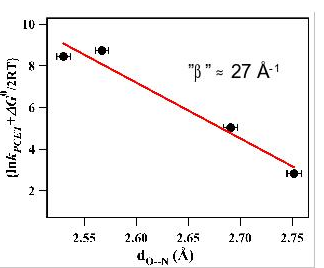 Four different mechanistic regions of PCET were demonstrated in a single tyrosine complex, each with different pH-dependence and kinetic isotope effect.

We demonstrated the first example of accumulative electron transfer in a molecular system leading to a reversible, two-electron charge-separated state (no sacrifical agents used). This proof-of-principle experiment is a step towards bridging the gap between single-electron charge separation and multi-electron catalysts of fuel formation and water splitting. (Collaboration with Dr. Fabrice Odobel, Nantes University) 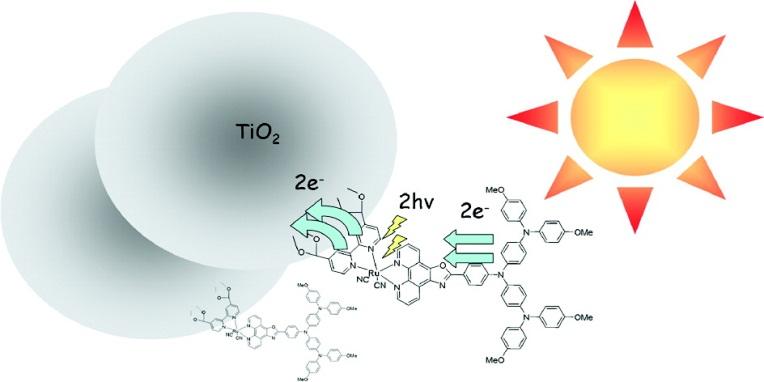 Photoexcitation of the aqueous Zn(II)porphyrin-methylviologen complex leads to ultrafast forward and back electron transfer: tau(FET) = 180 fs, tau(BET) = 700 fs. The excess energy of the excitations survives both electron transfer steps, leading to hot ground states. Variation of excitation energy (S2 vs. S1 excitation) influences the product distribution of this two-step electron transfer. A series of similar complex showed a Marcus normal region free energy dependence, supporting our hypothesis that the reaction from the S2 state occurs via electronically excited radical pairs.

(In collaboration with the groups of Anders Hagfeldt at Uppsala Universitet and Fabrice Odobel at Université de Nantes.)

Coumarin 343 dye and a Fe-complex, previously shown to be a proton reduction catalyst were co-adsorbed to NiO. We could show that excitation of the dye led to rapid (< 50 ns) reduction of the catalyst. This shows that lateral surface electron transfer is possible, so that co-adsorption is a feasible way to construct photocatalytic NiO electrodes for hydrogen production. 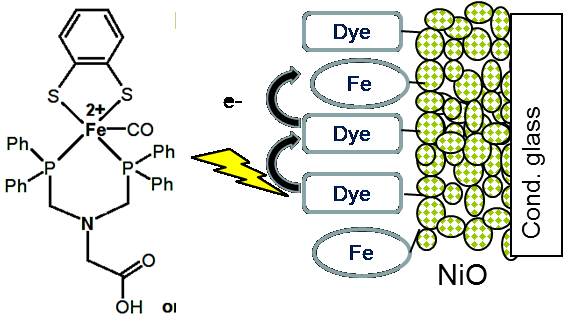 A Ru-NMI dyad on NiO showed substantial improvement of photovoltaic device properties compared to the corresponding Ru dye. We could show that the appended NMI acceptor unit was reduced, which substantially reduced the rate of recombination with NiO(+) and at the same time increased the rate of dyad regeneration by the Co(dtb)33+ electrolyte.

We showed that dye-NiO charge recombination occurs in the Amrcus normal region, in spite of a large expected driving force, based on the NiO valence band potential value. We propose that recombination instead occurs to intra-bandgap states, which may be one reason for the rapid recombination reaction. 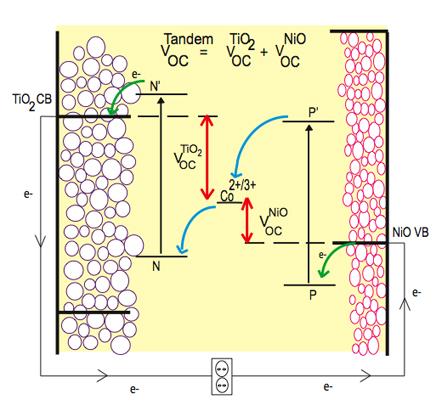 Hydrogenase enzymes catalyse the reversible reduction of protons to H2. In collaboration with Sascha Ott & Reiner Lomoth we study the properties and catalytic mechanisms of synthetic Fe2- and Fe-complexes inspired by the active site of FeFe-hydrogenases.

Coumarin 343 dye and a Fe-complex, previously shown to be a proton reduction catalyst were co-adsorbed to NiO. We could show that excitation of the dye led to rapid (< 50 ns) reduction of the catalyst. This shows that lateral surface electron transfer is possible, so that co-adsorption is a feasible way to construct photocatalytic NiO electrodes for hydrogen production.

Molecular proton reduction catalysts of Pt and Pd have received much interest. We used a range of techniques to show that Pd colloids were formed under typical photoreducing and that they could account for the observed H2 production.