Andrew Howe is defending his PhD thesis entitled "Immobilisation of Ru-based molecular catalysts for electrochemical water oxidation" in the subject of Chemistry.

Link to the thesis in full text in DiVA.

Artificial photosynthesis requires catalysts for efficient and selective conversions of small molecules. Molecular catalysts are advantageous to use in these instances as they offer precise control over chemical reactivity. They are synthetically tuneable, and their catalytic mechanisms are often well documented and more readily understood than those of solid-state catalysts. In this thesis, the synthetic incorporation of molecular catalysts into heterogenised molecular anodes for water oxidation are evaluated. The catalysts are incorporated as structural linkers into porous metal-organic framework (MOF) structures, and as coordination oligomers stacked onto graphitic surfaces.

The preparation of MOF/molecular catalyst hybrid materials of two topologies, UiO (UiO = Universitet i Oslo) and NU-1000 (NU = Northwestern University), were investigated. Multiple synthetic methods for the incorporation of molecular ruthenium-based catalysts into MOFs were examined in papers I and II. In paper III of this thesis, a Ru-bda type molecular complex was successfully used in the solvothermal synthesis of a new MOF. The resulting material is the first of its kind that is built exclusively from molecular water oxidation catalyst linkers. It is shown that MOF incorporation greatly enhances the structural stability of the catalyst linker in chemical water oxidation experiments, giving rise to higher turnover numbers compared to that of a homogenous reference system. Finally, paper IV describes a stable and inert molecular ruthenium complex, which possesses a flexible adaptative multidentate equatorial (FAME) type equatorial ligand with a carbanion on the equatorial ligand that forms a C-Ru bond. This molecular complex is studied in homogeneous phase, and subsequently incorporated into a coordination oligomer, which can be activated for water oxidation catalysis. This finding broadens the field of molecular catalysis significantly, and proves that supramolecular interactions can be used to promote electrocatalysis in complexes which are otherwise too inert and stable to engage in electrocatalytic reactions. 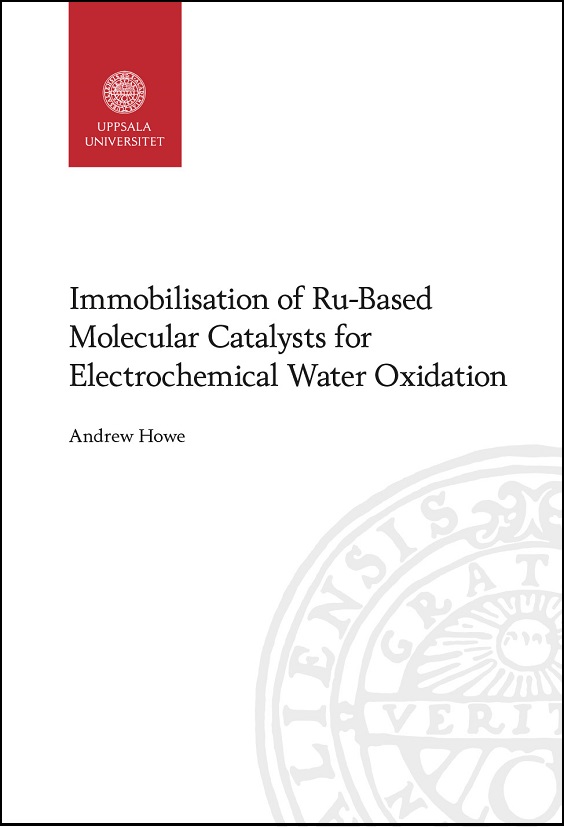