The construction and cleavage of C-C, C-Het (Het = heteroatom), and Het-Het bonds are at the heart of organic, polymer, biological, and medicinal chemistry. The research in the Streuff group focuses on the development of unconventional methods for such bond formations and cleavages that are not accessible by conventional means. To achieve this, the group works at the interface of transition metal catalysis, organometallic chemistry, and physical organic chemistry to develop the envisioned methods, to design and synthesize new catalysts, and to understand the underlying complex mechanisms, respectively. Currently, we are working on four research lines, which are briefly outlined in the following. 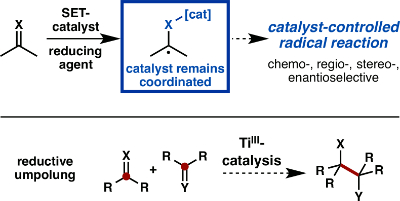 One central concept behind our research is the development, understanding, and application of radical reactions that proceed under the control of a transition metal catalyst. A scenario is realized, in which a single-electron-transfer (SET) catalyst generates a radical and remains coordinated to the radical intermediate afterwards, enabling an efficient control of the chemo‑, regio-, stereo-, and even enantioselectivity of the reaction. Based on this principle, we have developed a series of so-called reductive umpolung reactions that allow the formation of otherwise difficult-to-form C-C bonds in presence of an in situ generated titanium(III) catalyst and a reducing agent.

As an illustrative example, we have realized an asymmetric titanium(III)-catalyzed reductive ketonitrile cyclization that gives α-hydroxyketones from readily available ketonitriles in high yield and enantioselectivity (see: Angew. Chem. 2012). The concept has been expanded to a series of other reductive umpolung reactions for the synthesis of α-aminoketones and pyrrolidinones, intermolecular cross-couplings, Michael-umpolung reactions, and sequential double-umpolung processes. We are currently further exploring this concept applying it in the synthesis of heterocycles and natural products. For more details, see our publications page. 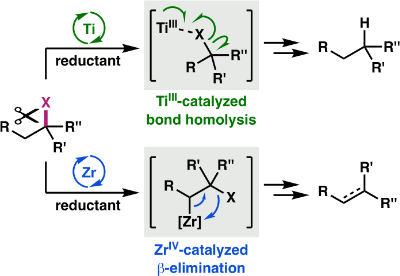 Modern transition metal catalysis in organic chemistry usually deals with the construction of complex molecules and the installation of functional groups. In contrast, we are interested in developing methods for the controlled deconstruction and the selective defunctionalization of complex molecular structures. We are therefore investigating novel catalytic-reductive cleavage reactions that are enabled by either a single electron transfer (SET) from a transition metal catalyst or a catalyzed β‑elimination. We have successfully applied both concepts in form of mild titanium-catalyzed decyanation reactions (see: Angew. Chem. 2019) as well as a set of zirconium-catalyzed C‑O, C-S, and C-N cleavage reactions (see: Org. Lett. 2019 and ACS Catal. 2020).

Chiral ansa-titanocenes and -zirconocenes such as (ebthi)-TiCl2 have previously been identified as “privileged catalysts” for asymmetric transformations and stereoregular olefin polymerizations. The synthesis of structurally modified carbon-bridged derivatives, however, has always been a tremendous challenge. Our lab has developed a modular 5-step approach to customized ansa-metallocenes from simple precursors that allows the facile introduction of custom modifications (see: Chem. Eur. J. 2018). It has been applied to modified (ebthi)-titanocenes, zirconocenes, and hafnocenes with changes in the ring substitution and ansa-bridge motif, including the introduction of a chiral bridging unit. We are currently working on the design of other metallocene-based catalysts and their application in new (asymmetric) transformations.

Driven by the curiosity to understand titanium(III) catalyzed reductive umpolung reactions, we have developed a powerful combined approach of various experimental and theoretical methods for the elucidation of complex catalytic mechanisms. The puzzle of the titanium(III) catalyzed ketone-nitrile cross-coupling reaction was solved by a combination of EPR and online-ESI MS experiments together with in situ IR kinetics and DFT calculations (see: J. Am. Chem. Soc. 2015). From the results, an unprecedented radical combination mechanism involving two titanium(III)-species was established and a unique role of cationic off-cycle intermediates was revealed. In support of the conclusions and for the refinement of the mechanistic pictures, we often carry out DFT studies that are always based on the input from our experimental results (see: Dalton Trans. 2018). In our ongoing projects, similar combined approaches are being applied for mechanistic investigations and reactivity studies.