Many interesting chemical and physical phenomena which take place on surfaces of metal oxides rely on the material's ability to repeatedly alter the electronic surface structure. For most metal oxides this functionality is connected to the degree of non-stoichiometry and the presence of structural defects. In many catalytic applications, for example, the metal oxide surfaces display optimal performance at rather high temperatures, and it is therefore essential to include thermal distortions in any investigation of the mechanisms behind the functionality. It can be expected that dynamical changes in the surface structure will drastically alter the electronic structure, and thereby also the catalytic characteristics of the surface.

For many simple binary metal oxides, most bulk properties are rather well understood, but comparatively little is known about their surfaces. The loss of the 3-dimensional periodicity at a surface will result in changes in the electronic structure and the interatomic interactions. The fundamental understanding of how the surface properties differ from the bulk continues to be a great challenge to scientist, not least because so many of the most important technological processes today involve solid surface in one way or another.

Dynamics in Ceria and related materials from MD and LD

The importance of ceria and other ionic compounds is due to their structural and electronic properties, as well as their dynamical properties, and in fact these are closely interrelated. The characteristics of the dynamics, i.e. ionic vibrations and diffusion, can play a key role in determining the properties and function of a material. Ion dynamics in the bulk and at the surface of ionic materials is the main theme of this thesis. The focus is on ceria and ceria surfaces, but also two model systems, namely the isomorphic CaF2 system and the well studied MgO(001) surface.

Molecular dynamics using an analytical potential of the shell-model type for reduced bulk and slab systems were performed by replacing 1/4 of the Ce4+ ions with Ce3+ ions, and then charge balancing by removing oxygen ions. The non-stoichiometric formula is thus CeO1.875. The oxygen removal and reduction of cerium ions were both performed randomly, and independently of each other. From the MD simulations, it was found that the lattice parameter for reduced ceria is 1.3% larger than for stoichiometric ceria. For the same degree of non-stoichiometry as in our MD simulations, a cell expansion of 1.1% was reported. 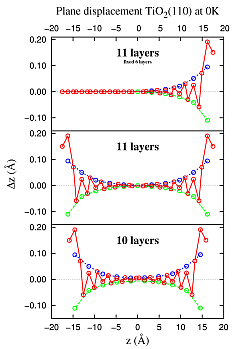 Dynamical properties and relaxation of TiO2(110)-(1x1) surface by Molecular Dynamic (MD) and lattice dynamic techniques (LD) are in the main focus. Two different model potentials, namely one rigid ion based and one variable-charge based have been utilized to evaluate the quality and reliability of the simulated surface properties that have been found to depend strongly on the way the virtual slab has been constructed. Several different slab constructions have been considered, namely:fig odd or even number of layers – leading to significantly different structure relaxation, surface region on top of fixed (bulk like properties) region as reference point for comparison and lamellar case in which the virtual slabs are separated with different gaps in the 3D periodic boundary conditions. Dynamical properties, such as, mean square displacement (MSD) as function of depth and time dependence of instantaneous square displacement (iSD) are also subjected and studied by newly developed in-house MD code with 2D Ewald summation technique for the treatment of slab systems and module for charge equilibration by Rappé and Goddard III scheme. Dynamics of the charges is considered as well, for the evaluation of the reliability of the constructed models.