Metal oxides, such as ceria, titania, magnesium oxide and tin oxide, have a wide range of important industrial applications. These range from environmental gas sensing and oxygen buffering in vehicle emissions catalysis, to uses as electrolytes in fuels cells or as wide band gap semiconductors. All of these applications depend critically upon the properties of native point defects, impurities and dopants (See figure.).

Understanding properties like the stability, structure, electronic behaviour and mobility of these defects is key both to understanding the macroscopic properties of the materials and to the improvement of existing materials or the development of new ones for future applications.

(Examples below: 1: Native Defects in Ceria, 2: Optimization of DFT-LDA+U method for Vacancies in Ceria, 3: Vacancies and Dopants in Zinc Oxide.) 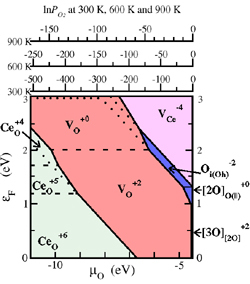 Ceria (cerium dioxide) is a key component in the Three Way Catalysts (TWCs) used to clean vehicle emissions. Its main role is to store and release oxygen via the creation and destruction of native defects. It is also used as an ionic conductor in gas sensors and in solid state electrolytes through the creation and movement of native defects. The most important such defect is the oxygen vacancy, but the possible presence and roles of other defects has largely been neglected. We have been studying the relative concentration and importance of all native point defects in ceria, as a function of external conditions (oxygen partial pressure) and internal conditions (doping, quantified by the Fermi level). The most stable defects as a function of the conditions are shown in the figure. We find that, although oxygen vacancies are indeed the most important over a wide range of conditions, cerium vacancies, oxygen interstitials and cerium antisites are also important.

Example 2: Optimization of DFT-LDA+U for Vacancies in Ceria

Radial Ce 4f charge distribution around a vacancy in ceria, at various U values, using DFT-LDA+U.There is a well known problem with the application of DFT-LDA to ceria: the LDA and GGA functionals fail to describe the strong correlation effects of the Ce 4f electrons, in particular their localization. This localization is observed experimentally through the conductivity data: n-type conductivity in ceria occurs via the hopping of negatively charged polarons (essentially localized Ce 4f electrons) from cerium ion to cerium ion. This localization also energetically stabilizes oxygen vacancies, leading to the oxygen storage behaviour; the two electrons left behind by the removal of an oxygen atom are localized on two neighbouring Ce ions. This important property is missed by DFT-LDA/GGA, but the problem can be overcome with the LDA+U technique. Here, a Hubbard "U" term is empirically added to treat the Ce 4f electrons, while the other electrons are treated using normal LDA or GGA. We have been optimizing the method by studying various properties of defect free ceria and of ceria vacancies as a function of both U and the choice of functional (LDA and the PBE and PW91 variants of GGA). We find the most accurate functional for ceria to be LDA+U, and the best choice of U to be about 6 eV (5.5 eV for GGA). The figure here shows the radial Ce 4f charge distribution around a vacancy as a function of U for LDA. 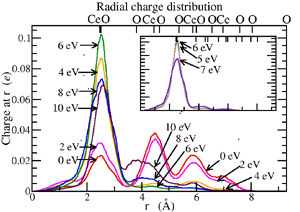 ELF of V_O in ZnO.Oxygen vacancies, VO, are also believed to be one of the most abundant native point defects in ZnO and are very important for surface reactions such as catalysis and gas sensing. For example, ZnO/Cu/Al2O3 is today the preferred catalyst in methanol synthesis. ZnO is able to catalyze this reaction on its own and it is believed that the VO act as active sites during this process. We have performed detailed DFT-PBE studies of the electronic and geometric structure of oxygen vacancies both in bulk and on the (10-10) surface, using plane wave basis sets and supercells. We have found that it is possible to change the number of electrons that are localized in the vacancy by altering the Fermi level through doping. The image below is the ELF (Electron Localization Function) for VO on the surface of undoped ZnO. It shows the location of the localized electron at the centre of the vacancy. 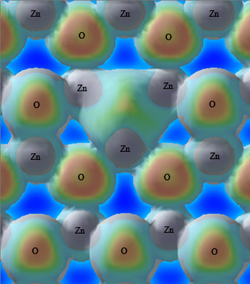 Since the electrons located in these vacancy states are believed to be those contributing to the active site behaviour and surface reactivity, we hope to use doping to control the ability of the vacancy to donate/accept electrons and so tune the catalyst or gas sensor to improve performance.