Here we present a few different projects involving H-bonding and vibrational frequencies that we are involved in.

1. Traditional H-bond correlations - do they hold in aqueous solution ?

In the solid state, H-bond related correlation curves are well known. Such correlation curves are plots between, for example, geometrical and vibrational parameters such as OH frequency, R(O...O) and R(H...O), obtained from X-ray and neutron diffraction and vibrational spectroscopy for many hydrogen-bonded equilibrium solid-state structures. They have been found to be very informative and useful.

Using computational techniques we have plotted some typical H-bond correlation curves, but we have done it for aqueous solutions. Given the distorted geometries that occur in the liquid state, it is not clear that any of the correlations known from the solid state will still hold. The figures below show such "instaneous" correlation curves for a Li+(aq) solution studied by MD simulation. The geometrical parameters in the plots are taken from the MD snapshots and the anharmonic OH vibrational frequencies were calculated with quantum-mechanical methods for the same snapshots (a MD+QM+QM approach). The figures show that some of these correlations indeed survive in solution.

The small and highly charged Al3+ ion exerts a strong polarising effect on its surrounding water molecules in an aqueous solution. The OH vibrational band for these water molecules is downshifted by almost 900 cm-1 (IR data) with respect to an isolated HDO molecule.

We have tried to understand this large frequency shift using two different computational approaches: Car-Parrinello molecular dynamics (CPMD) and a MD+QM+QM approach, which is described in more detail in the method section. In both cases, temperature effects at 300K were included.

The raw CPMD results from the Fourier transform of the velocity autocorrelation function are given on the second row in the table below. The agreement with experiment is not bad. However, since the calculations give essentiall harmonic OH vibrational frequencies (while experiment gives anharmonic freuencies), and the functional used in the simulations is not perfect, etc., the agreement with experiment should not be expected to be very good. Anharmonicity alone is known to affect the OD frequency by several hundred wavenumbers (cm-1).

We therefore performed a critical assessment of various systematic errors involved in the calculation of the water OD vibrational frequencies from the CPMD simulations (box-size effect, the choice of the "fictitious electron mass", the DFT functional, etc.) and made a crude correction for these effects, as shown in the last line of the table. Now the agreement with experiment for the ionic solution is worse! Only about 60% of the experimental shift is retrieved by the calculations.

The details of this procedure are given in:

We have also calculated the OH frequency for the first hydration shell around the Al3+ ion using a very different approach. Here we take snapshots from MD simulations and select finite embedded clusters from these, calculate OH potential energy curves using a QM method of our choice, and then calculate anharmonic vibrational OH frequencies with a QM method for the nuclei (see the Method section). This approach recovers almost 90% of the experimental shift for Al3+(aq). 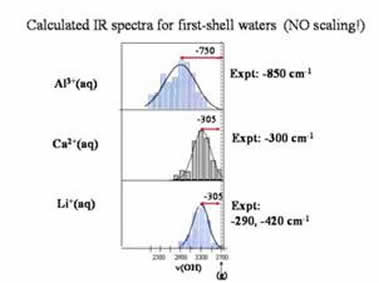 Molecules are usually weakened by intermolecular interaction. Water is one example, where the O-H bonds are weakened, elongated and redshifted (downshifted) in stretching vibrational frequency whenever the molecule is bound to some other species. These effects are well documented in the literature by results from diffraction, IR and Raman spectroscopy and theoretical calculations.

The opposite behaviour can occur, but is much less common. For such molecules, the intramolecular bond is thus strengthened, shortened and blueshifted (upshifted) in stretching vibrational frequency when the molecule is bound.

We have studied some such molecules and find that: 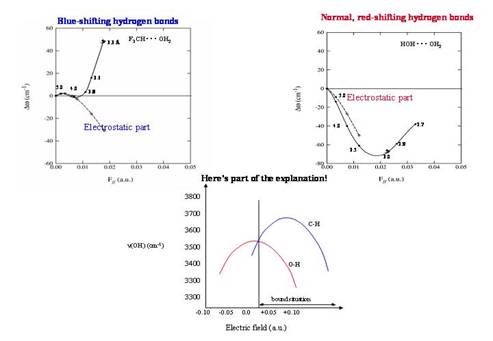 The results are taken from:

4. Bonding and vibrations in hydroxides (the LiOH crystal)

IR and Raman measurements in the literature show that the OH stretching vibrational band in LiOH(s) is blue-shifted (upshifted) by ~115 cm-1 compared to the gas-phase. This means that the intramolecular bond is strengthened when the molecule is bonded.

We want to address the following questions: Why is the OH frequency in LiOH(s) upshifted ? What is the nature of the OH group in the crystal ? How does the OH frequency change as we increase the system size from 'the isolated OH- ion --> (Li+)n.OH- clusters (n = 1, 2, 3, 4) --> an infinite LiOH sheet --> the LiOH(s) crystal'?

We have optimized the crystal structure of LiOH(s) using plane-wave DFT calculations of the US-PP/PW91-GGA type and the VASP program. The anharmonic OH stretching frequencies were calculated for two coupled anharmonic oscillators per cell.

a) Δω is the anharmonic frequency shift with respect to the isolated OH- ion.

Result: The agreement with experiment is good and the remaining discrepancy arises mainly from the BLYP functional and the pseudopotential used.