The rechargeable lithium-sulfur (Li-S) battery is one of the most promising "post-Li-ion" energy storage systems. The battery has the potential for very high gravimetric energy density - that is, a Li-S battery could store two to three times as much energy for a given weight compared to current Li-ion batteries. Other advantages of the system include relatively good safety, the potential for operation at very low temperatures, and lower cost: as a byproduct of the oil industry, sulfur is very inexpensive and highly abundant. However, short cycle life and high self-discharge remain barriers to wider commercialization, and very complex chemistry makes this system challenging to study.

Our research within this field includes the development of functional binders for the sulfur/carbon composite electrode, interfacial studies on the lithium electrode, methods for real-time electrochemical analysis and their combination with other operando techniques.

Development of functional binders
Binders are polymeric materials that are used in electrode production to combine the active material and other components to form a mechanically stable composite electrode. Despite their small weight fraction, binders play an important role in lithium-sulfur batteries due to the unique “catholyte” nature of the system. The active material, sulfur, becomes soluble in the common electrolytes once it is reduced to Li2Sx (x=2–8), which are referred to as “polysulfides”. If the binder swells in the electrolyte, its functional groups can interact with the soluble polysulfides, resulting in higher sulfur-utilization and capacity-retention of the cell.

Different binders interact with the polysulfide solution differently. The photo is shown in gray-scale for better contrast.

Interfacial study on the lithium electrode
Metallic lithium is regarded as the ultimate negative electrode material for Li batteries owing to its low reduction potential and high specific capacity. However, its high reactivity and inhomogeneous stripping/plating behavior pose a threat to the safety and cycle life of the battery. This problem is compounded in lithium-sulfur batteries by the above-mentioned catholyte nature of the system. Soluble active materials in the electrolyte can react with lithium, resulting in self-discharge. A stable and protective interface between lithium and the electrolyte is necessary to avoid such waste in active materials. The mechanism of the formation of the passivation layer on lithium and its effect on the electrochemical performance is our ongoing research.

Real-time electrochemical characterization
Due to the complex reaction mechanism, the cell resistance of a lithium-sulfur battery can vary substantially in a course of discharge or charge. In order to study how the experimental parameters affect the electrochemical properties, our group has been developing a nondisruptive method for resistance measurement—which is termed the Intermittent Current Interruption (ICI) method. Our recent results show that the ICI method can probe both the internal and diffusion resistances, which is especially useful when combined with other operando characterization techniques, e.g. operando XRD. 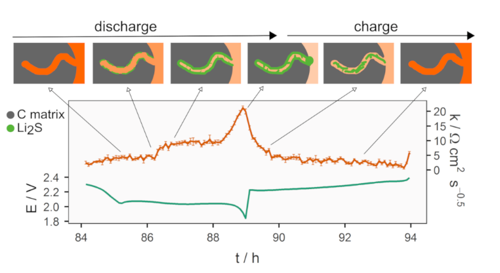 Together with operando XRD, the diffusion resistance reveals the transport properties of the porous matrix of the sulfur/carbon composite electrode.