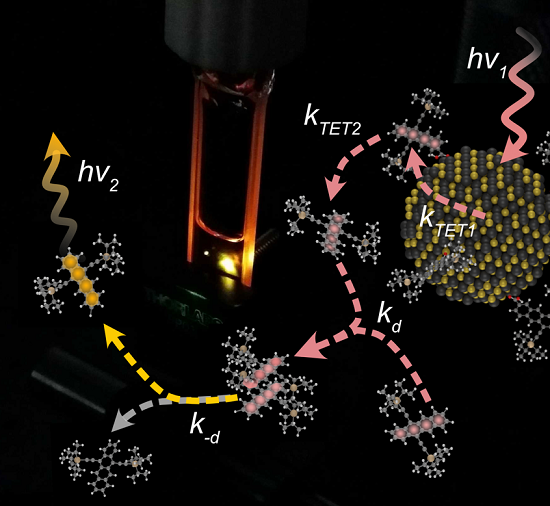 When a molecule or material absorbs light it becomes excited and we study how these excited states behave by using a range of spectroscopic techniques such as transient absorption and fluorescence spectroscopy. An excited state can for example be transferred to a new molecule (energy transfer) or transfer an electron/hole to generate a charge separated state. Other fascinating possibilities are the splitting (fission) of an excited state to two low energy states, or the fusion of two states to one higher energy state.

Two topics of particular interest in the group are:

Singlet fission is a process in some organic molecules that splits a singlet excited state into two triplet excited states on neighbouring molecules. In this way the photon energy can be split in two. By incorporating singlet fission with solar cells, the solar cell efficiency could be significantly enhanced by using the high energy part of the solar spectrum more efficiently.

The process where two low energy photons are combined to generate one photon of higher energy is called photon upconversion. Photon upconversion can be achieve through a process known as triplet-triplet annihilation (TTA), which is the reverse of singlet fission. Here two triplet excited states are fused to form one high energy singlet state. With photon upconversion, light that otherwise is not absorbed by a device is made available, with the possibility of enhancing solar cell and photocatalytic device performance.

If you want to know more about the research within the Gray Group, see the group's external website for more information:

Co-workers
Find out about the members of Gray Group.
Publications
Gain a deeper insight within the research in Gray Group.
Last modified: 2022-08-15
Print