The presence of one or more interfaces changes the properties of a polymer molecule in a number of interesting ways. These differences can often be used in various applications, e.g., the design of lubricants, adhesives, and biosensors. Understanding the interrelation between confinement and molecular shape is therefore a key issue towards a microscopic theory of important polymer phenomena, and for the development of tailor made molecules in various applications.

During recent years, experimental development has been able to provide new information on the properties of single macromolecules, including when compressed by the tip of an atomic force microscope. In order to understand these results, one needs to quantitatively measure the effect of boundary conditions on the average molecular shape.

Using both Monte Carlo and Brownian dynamics simulations, we have in detail studied how various molecular parameters affect the structure of both single molecules during a collapse transition, and a polymer layer under compression. 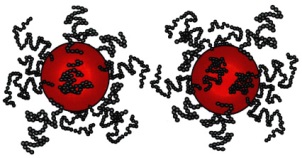 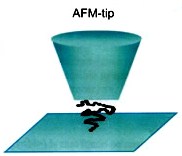 Looking in more detail on the process of compressing a single molecule, a number of configurational changes are possible. It has been customary to follow the radius of gyration, Rg, as a function of the parameters controlling the compression. This is, however, not enough to discriminate between different configurations. Including also the asymmetry of the molecule, essentially the eigenvalues of the radius of gyration tensor, will help to further characterise the molecule, but neither of these necessarily capture the effect of self-entanglemet, as can be seen in the figure below.

The two molecules have the same size and the same shape, but are still folded differently. In order to address the question of how the self-entanglement depends on molecular parameters, we also calculated the mean overcrossing number, as well as the size and shape of the molecule, when analysing, e.g., the effect of confinement on polymer brushes.

In an extensive series of simulations for a large range of molecular parameters, the results could be used to construct a configurational "phase" diagram showing what combinations of persistence length, P, and interactions energy (i.e. ε in the Lennard-Jones potential), which would result in a swollen or collapsed chain. It was also possible to construct a Master curve of the entanglement (in terms of the overcrossing number) vs. Rg, valid for all confinements, persistence lengths, and interaction energies.

We are currently extending our work to study the effect of compression rate on the size and entanglement, and also detect any hysteresis effect when releasing the confining surface.

Simulations of structure and dynamics of crosslinked polymer gel systems

Computer simulations as a way of performing theoretical experiments, is an important tool linking theory and experimental results. For colloid and polymer systems, the equilibrium properties can be studied by Monte Carlo simulations, and the dynamical characteristics can be investigated by molecular dynamics or Brownian dynamic simulations. For bulk systems, periodic boundary conditions in a Euclidean space are often introduced to mimic a macroscopic system. For short-range interactions such as a Lennard-Jones potential, one can use a cuf-off distance which works well given a large enough simulation cell.

For long-range forces such as electrostatic interactions, one should, in principle, take into account the infinitely many periodic images. In practice one can rewrite the sum into expressions which converge considerably faster than a straightforward summation, and the most common example is Ewald summation. An alterative way to overcome the difficulties with periodic boxes is to use spherical boundary conditions. To simulate a system in Rn, one can embed the system on a sphere in Rn+1. Usually we are interested in R3, and we could thus embed our system on the surface of a ball in four dimensions, i.e. the three-sphere, S3. This will result in a closed expression for the Coulombic force.

1) Curving the tangent plane (a hyperplane) to S3, and 2) a 3-dimensional ball from the hyperplane.

This idea was originally developed by Caillol et.al. in a series of important papers using Monte Carlo simulations of electrolyte solutions see, e.g., (1). To also obtain dynamic properties for polymer and colloidal systems, however, one typically uses Brownian dynamics simulations, and a method for this type of dynamic simulation on S3 has also been developed (2), including generating a random diffusion process on S3, and a description of how to obtain the diffusion coefficient for a closed system like S3, where the random walker can not escape to infinity, i.e. <x2> is not proportional to t. This analysis also resulted in a novel method for generating a random walk on S2, (the "normal" sphere) (3). The methodology was further developed  to include the simulation of polymer chains on the 3-sphere (4). Thus the whole spectrum of soft matter simulations can now be performed without the need for periodic boundary conditions.

Our current interest is in modeling cross-linked polymer networks (5) to better understand the relation between molecular properties, the microscopic strucure of the network, and the swelling/shrinking of a gel and how this will affect the transport properties of small molecules, colloidal particles, and polymers.

This work is done in collaboration with professor T. Ekholm.