Our research, that are part of the Consortium for theoretical x-ray science, includes first-row transition metals form the active sites of many homogeneous, heterogeneous and biological catalysts, as well as development of better catalysts requires knowledge about electronic structure of the metal 3d orbitals involved in metal-ligand bonding and catalysis.

The goal of the research is to analyze the electronic structure and reactivity of transition-metal catalysts, in particular those involved in catalysis of solar fuels. This is achieved through theoretical studies of reaction mechanisms, but also by the direct connection to spectroscopic data. One important technique is X-ray spectroscopy, which offers a unique local and element-specific probe.

Solar fuel systems store solar energy in chemical bonds by formation of e.g., hydrogen or methanol. Development of better catalysts requires knowledge about electronic structure. Transition metal complexes are often probed by UV/Vis spectroscopy, but in a solar fuel system the catalyst is coupled to one or more chromophores designed to absorb strongly in the UV/Vis region. In principle, this limitation can be overcome using X-ray spectroscopy, but the challenges have been to:

Recent progress in instrumentation, and the use of resonant inelastic X-ray scattering (RIXS) to circumvent the energy-time uncertainty principle, show that the first challenge can be overcome. With the development of high-brilliance X-ray sources; synchrotron lightsources like Max IV and potentially free-electron lasers, these techniques can be applied also to proteins, solution catalysts and other low-concentration samples.

The experimental developments call for matching progress in the modeling of X-ray spectra. Transition metal catalysts require methods that correctly describe the multiplet effects that shape the high-resolution spectra, and that can also be applied to non-symmetric systems. The specific aims of the current project are therefore to:

This modeling approach will be able to describe a range of X-ray processes, including time-resolved experiments, which can make it an important tool in the expanding field of X-ray science.

Parts of the project are supported by the Consortium for Theoretical X-ray Science (CoTXS), a collaboration between seven research groups at KTH, Linköping University, Stockholm University and Uppsala University. CoTXS is financed by the Knut and Alice Wallenberg foundation. 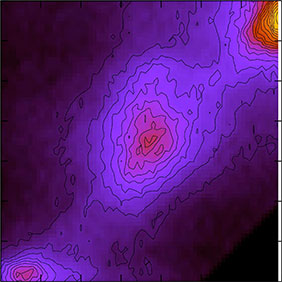 Photosynthesis is the biological process that has the most fundamental impact on this planet. Thanks to this process, plants make solar energy accessible to living organisms and fill the atmosphere with oxygen. Knowledge of the mechanism of photosynthesis could possibly help in developing cost effective solar cells.

A prototypical solar fuel system consists of a chromophore that absorbs light, a catalyst for the electron-donating reaction, and a catalyst for the fuel-generating reaction. We have previously studied O2 formation from water in the oxygen-evolving complex in photosystem II and in biomimetic complexes, as prototypes for the electron-donating reaction. We are currently we are investigating the electronic structure and reactivity of Co-based hydrogen-evolution catalysts in collaboration with experimental groups at the Department of Chemistry - Ångström. The initial targets are the reaction mechanisms for hydrogen evolution, and how reactivity is affected by the properties of the catalyst. An important step in the modeling is to connect the reactivity patterns with electronic structure information from EPR, UV/Vis and X-ray spectroscopy. Modeling is performed using both density-functional theory and multiconfigurational wavefunction methods. 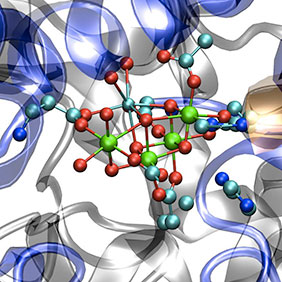 Enzymes catalyze many reactions both faster, and more selectively, than most man-made catalysts. If the mechanisms of enzyme catalysis could be understood, it could inspire the development of new efficient catalysts in many processes. We are especially interested in systems containing transition metals, because of they are involved in some of the most important biological reactions, photosynthesis and cell respiration.

Modeling is performed using both density functional theory (DFT) and multiconfigurational wavefunction methods. To improve the modeling of the protein surrounding, we use multi-scale models. Most commonly used is the combination of a quantum mechanics and a molecular mechanics method (QM/MM). We try to improve the description of the interactions between the QM and MM layer by designing QM/QM' models where QM’ is a relatively fast molecular orbital method that can describe charge transfer and mutual polarization between the reactive region and the protein surroundings. Another interesting method is to evaluate the MM contributions to catalysis using QM/MM-FEP methods (classical free energy perturbation).

We have applied these multi-scale methods on iron proteins, e.g.,  isopenicillin N synthase, involved in antibiotic synthesis, and 4-hydroxyphenylpyruvate dioxygenase, that performs biosynthesis of essential compounds for photosynthesis. 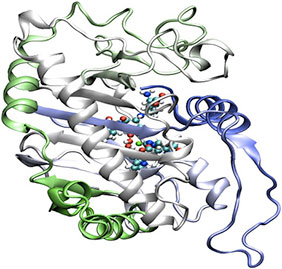