Quasicrystals (QCs) are intermetallic compounds that possess long-range aperiodic order with diffraction symmetries forbidden to conventional crystals. Their discovery in 1982 in a rapidly solidified Al-Mn alloy was highly controversial since long-range order and three-dimensional (3D) periodicity were thought to be synonymous. Although QCs can be described mathematically as periodic crystals in a virtual space of higher dimensions, envisioning long-range order beyond 3D periodicity posed a great perceptual challenge. A true milestone represented the atomic structure solution of the icosahedral YbCd5.7 quasicrystal in 2007, which for the first time completely revealed the extreme structural complexity of QCs. 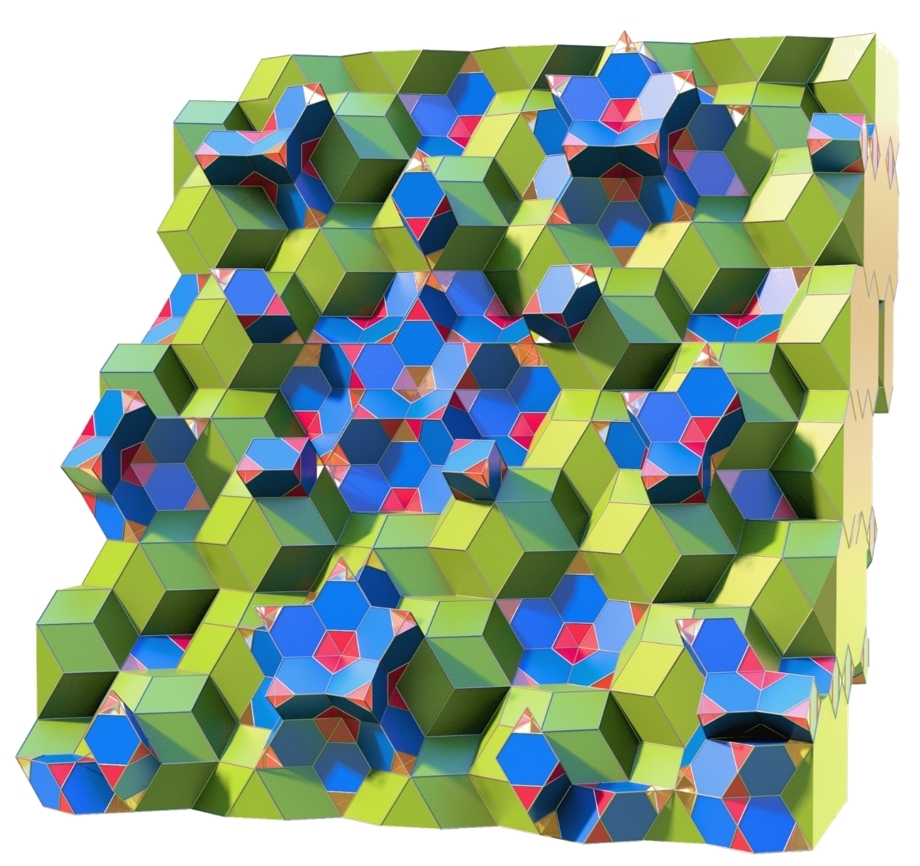 Structure of the icosahedral YbCd5.7 quasicrystal.

The effects of quasiperiodic long-range order on the physical properties of a material are still far from understood, let alone being exploited in applications. In particular, the characteristic properties of the electronic states of a QC, whether they are extended as in periodic crystals or localized as in amorphous materials, are still unresolved. Another fundamental topic to be resolved is the nature of magnetic interactions and magnetic ordering of spins arranged in a quasiperiodic structure. There have been many predictions of scientific and technological implications based on supposedly anomalous electronic and magnetic properties of QCs. Perhaps most interesting are speculations into new states of magnetism with relevance to e.g. quantum computing and memory storage. The purpose of our research is to reveal distinct and novel electronic and magnetic properties of QCs that are introduced by the quasiperiodicity.

To our aid we have Approximant crystals (APs). These are complex alloys of similar composition and local atomic order (atomic clusters) as the related quasicrystals, with the distinct difference of being periodic. In other words, their structures can be studied by conventional diffraction techniques thus providing invaluable information concerning the build-up of the atomic clusters that also serve as the basic building blocks of related quasicrystals. Because we aim to find new properties which can be associated with the aperiodic order found in quasicrystals, we constantly study and compare the data with that of related approximants; since the aperiodic order of atomic clusters constitutes the main difference between them.

Synthesis and atomic scale design of complex alloys
By careful control of synthesis parameters, we can control the atomic structure of QCs and APs at the cluster level, thus producing large bulk single crystals with fine-tuned physical properties. As an example; in RE-Au-Si approximants (RE=Lanthanides), various forms of magnetic long-range order have been identified. By crystal engineering, we can entirely replace disordered Au/Si tetrahedra by single moment bearing Rare Earth atoms at the cluster centers of approximant crystals grown to several millimeters in size. The replacement profoundly changes the magnetic properties of the bulk material.

Complete replacement of a disordered Au/Si tetrahedron (blue) by a single moment bearing Rare Earth atom (red) at the cluster center of an approximant crystal.

Methods
For synthesis and characterization we have a broad selection of equipment at our disposal. For synthesis we mainly employ the self-flux method were large single crystals of the metallic alloy samples are grown and extracted from the melt by centrifugation. In this way we can obtain large, phase pure, facetted single crystals. In-house structure analysis is performed by both powder and single crystal X-ray diffraction. Our single crystal diffractometer is equipped with a micro focus source, which is ideal for highly absorbing samples containing gold.

Melt-grown single crystal of a RE-Au-Si approximant extracted by centrifugation.

Long range ordered magnetic and atomic structures of the quasicrystal approximant in the Tb-Au-Si system. https://uu.diva-portal.org/smash/record.jsf?pid=diva2%3A735433