Astrid Nilsen-Moe defends her PhD thesis with the title "Mechanistic studies on proton-coupled electron transfer from tyrosine and tryptophan derivatives" within the research subject of Chemistry with a specialisation in Physical Chemistry.

Proton-coupled electron transfer (PCET) from tyrosine (Y) and tryptophan (W) is vital to many redox reactions in Nature where PCET between several Ys, or Ws, or between a mix of Ys and Ws can be used to transfer electrons, or protons, or both over large distances of several Å. Studying the PCET reaction mechanisms of Y and W is important for fundamental knowledge, and can help researchers that wish to mimic redox reactions in Nature. To this end, model proteins and small model molecules can be used to investigate PCET reactions without the complexity of large enzymes.

PCET can proceed via two different types of mechanisms; the stepwise mechanism and the concerted mechanism. Detailed mechanistic studies to determine which PCET mechanism dominates are often difficult to perform on biological systems due to their size and complexity, which is why we instead study model systems. In this thesis, the PCET mechanisms and their dependence on pH and driving force for electron transfer (ET) and proton transfer (PT) are studied by determining PCET rate constants using transient absorption (TA) as a function of pH and driving force for ET and PT.

In Papers I and II, Y and a Y derivative sequestered in a model protein are studied. The results show that the PCET mechanism for Y is dependent on bulk pH, with a stepwise PCET mechanism at high pH, and a concerted or stepwise mechanism at lower pH depending on the driving force for ET and PT. Interestingly, these are all parameters that can shift depending on the protein environment, which can be finetuned in Nature to promote a certain PCET mechanism. H2O is an inherently poor proton acceptor due to its low pKa = 0. Nevertheless, from TA kinetic and molecular dynamic simulation studies, we suggest that H2O is the primary proton acceptor for the CEPT reaction in the model systems. These studies also indicate that the protein structure gates intrinsically better proton acceptors (such as buffer species) from coming into sufficiently close contact with the Y or Y derivative, even when the Y derivative exhibits as much as 30 to 40% exposure to the solution.

Link to the PhD thesis in full text in DiVA. 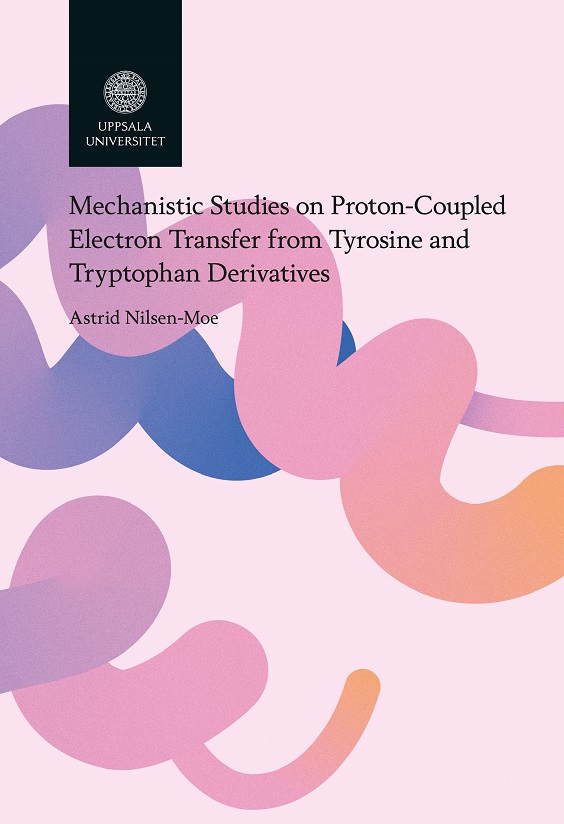